Adding “… in 7 Days” to the title would have been catchy. Not true, but catchy. In fact, it was just over 5 years. And, it was the 90s, the era of crazy Internet valuations. So, before I tell my story, let me preface it by saying these were ridiculous figures based on the precipitous climb of the NASDAQ at the end of 1999 and a well-timed acquisition by a strategic buyer in early 2000. Adding a disclaimer “RESULTS NOT TYPICAL. INDIVIDUAL RESULTS MAY VARY” would be a gross understatement.

The stories most people hear about start-ups only cover the final chapter. They’re exciting stories of massive IPOs, acquisitions, or colossal flame-outs. In late ‘99, my story could just have easily gone the other way, a colossal flame-out. When you’re shooting for numbers this big, it’s either go big or go bust. In the end, you’re playing a whole new game that often has little to do with your actual business fundamentals. Your big investors and investment banks are making the moves and riding the perceived-value wave of your company. Before it crests, they cash out and leave it to the market to decide what the company is really worth. If you can keep hitting your numbers, the market will, hopefully, continue to support that value.  It’s a fun ride if you enjoy roller coasters.

Don’t worry, though, I’ll get to the exciting finish. But, I’d be doing you a disservice by not telling you the whole story. Of course, my story benefits from the miracle of hindsight. Because it all worked out, many of our moves and pivots now appear insightful and brilliant. At the time, however, they were simply strategic decisions. Had we failed, you’d now be saying “What were they thinking!” Even now, 15 years after we sold the company, I still replay decisions we made and their timing and understand better why they worked.

In case you’re wondering who the “I” and “me” is in the story, I’ll tell you about myself. I’ll explain who “our” and “we” are as the story unfolds. My name is Kevin Manley. I’m an entrepreneur, business advisor, consultant, and exit strategist living in Daytona Beach, FL. The typical laundry list of titles for an entrepreneur between companies. I’m 45, married, and have 2 beautiful daughters (from a beautiful wife). Definitely feels like a lifetime and a world away from the single, 25-yr-old in Chicago who took the leap into entrepreneurship.

So, back in 1994, I had a freshly-minted MBA and MS in Engineering from the University of Illinois. I had been working as a Marketing Engineer for about a year for a manufacturer in Chicago. I’d love to be able to say that I had this vision of creating an Internet startup and selling it for $700 Million 5 years later. But, I (like you) had never heard of the Internet, or even startups. I’d also like to say that I had a passion for X and that drove me to start a company doing X. I didn’t. I didn’t even care about getting rich. The fact is, I was bored with my job. Not the most inspired reason for starting a company. 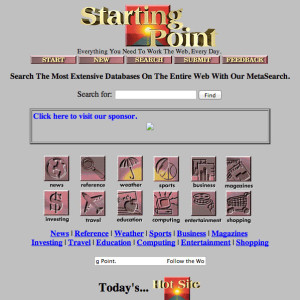 A friend I had had since middle school, Ken Wruk, who was also an engineer, called me in November of 1994 to show me the World Wide Web. Ken was working for a company that had a rare ISDN line and an Internet connection. He and a co-worker had been dabbling on the Web and created a site called Starting Point (stpt.com). It was an early web directory. Check out Wayback Machine at https://archive.org/web/ to see old websites in their glory days. We were so excited when they introduced centering of web pages.

Ken spent that November evening showing me email, websites around the world, and akebono.stanford.edu/yahoo (which would become yahoo.com 2 months later). I was hooked. Ken also showed me his giant “car” phone that I was really jealous of. But, I digress. He even had me, half-jokingly, sign a non-disclosure agreement on a napkin, but I’m still not sure what there was to disclose (am I violating it now, Ken?). I went out that night and bought my first laptop, dialup Netcom account, and surfed into the morning at a blazing 28.8 Kbps (those speeds are painful to remember).

We had a feeling that this WWW thing could be something big. At minimum, we knew that we were ahead of everyone else. So, I learned as much as I could, quickly. Ken also showed 2 other friends his discovery, Keith Speer and John Weiss, also engineers. So, in addition to our full-time jobs, we started trying to get businesses to let us build them websites, with limited success. Starting Point was also continuing to grow in popularity.

A few months later, around February 1995, I decided to quit my well-paying job to get this going. Imagine telling your parents in 1995 “Mom … Dad, I’m quitting my well-paying engineering job that you sent me to school for so I can start an Internet company.” Inter-what? They were surprisingly supportive, although I think they finally figured out what I was doing about the time we went public.  My other partners actually said “Don’t do it. We’re not ready.” But, fortunately, I was, and they still thank me for taking the plunge.

We became … wait for it … Superhighway Consulting, Inc. I’m so glad no one says “Superhighway” any more. Our first “world headquarters” was my dining room in my apartment on Surf St. (honestly) in Chicago. Even though I was the first to quit my job, I never felt alone. I had my partners, which I believe is so important to any successful startup. Don’t go it alone. If you really can’t convince anyone else to join you, reconsider the idea. I cut my expenses, which were already pretty low, and we tried to get enough business to support me.  I got us incorporated, bought my first cellphone (much cooler than Ken’s carphone), created business cards, brochures, and, of course, our first Superhighway Consulting website.

As I mentioned earlier, this isn’t a story of an inspired idea, a perfect business plan, and millions in funding to execute that plan. My partners and I simply jumped into the wild web before everyone else and navigated a path to success over the next 5 years. We never could have planned this in advance which is what I tell every new startup when I see their business plan. I tell them that it is important that they do create a plan to guide them, but I’m 100% certain that their plan is not an accurate picture of how they will ultimately succeed. They usually don’t believe me. 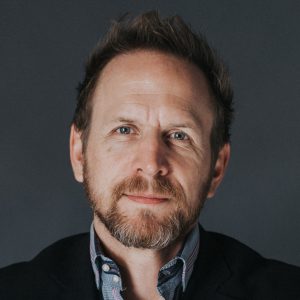 Kevin Manley, founder of The Exit Advisors, is a noted business strategist and entrepreneur. Kevin holds an MBA, a Masters in Engineering, and is a Certified Exit Advisor (CExP). He has founded, advised, and/or invested in a variety of companies in consumer electronics, medical technology, philanthropic technology, real estate development, etc.